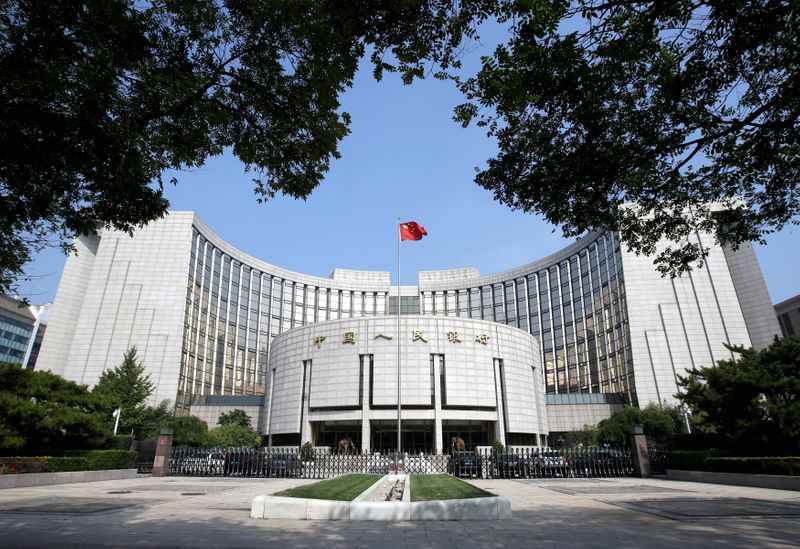 © Reuters. FILE PHOTO: Headquarters of the PBOC, the central bank, is pictured in Beijing

SHANGHAI (Reuters) – China is expected to keep its benchmark lending rate steady for the third straight month at its July fixing on Monday, a Reuters survey showed, encouraged by a stronger-than-expected rebound from the coronavirus crisis.

The remaining two expected a marginal reduction of five basis points (bps) in both tenors.

The overwhelmingly strong expectations for a steady fixing came as the People’s Bank of China (PBOC) kept borrowing costs on the medium-term lending facility (MLF) unchanged this week.

The MLF is one of the PBOC’s main tools in managing longer-term liquidity in the banking system, and serves as a guide for the LPR. The interest rate on one-year MLF loans has been kept steady for three months.

Data on Thursday showed China’s economy grew 3.2% in the second-quarter from a year earlier, faster than the 2.5% expected by analysts, as lockdown measures ended and policymakers ramped up stimulus after a record, virus-induced contraction early in the year.

But it was still the smallest expansion on record, and analysts said unexpected weakness in domestic consumption underscored the need for further support to keep the recovery on track.

Analysts say policymakers, encouraged by signs of momentum, are now likely to shift away from broader-based emergency measures to more specific schemes to help areas of the economy that are still struggling.

“For the central bank, this implies a much lower probability of cutting RRR (banks’ reserve requirements) or interest rates in the near future,” analysts at BofA said in a note to clients on Friday, saying they do not expect the LPR to be lowered again before the end of 2021.

“The authorities may turn their eyes to regulatory tightening with regard to credit that been illicitly channelled into the stock market and the real estate sector,” said Jacqueline Rong, senior China economist at BNP Paribas (OTC:) in Beijing.

The LPR is a lending reference rate set monthly by 18 banks.

All 36 responses in the survey were collected from selected participants on a private messaging platform.

Disclaimer: Fusion Media would like to remind you that the data contained in this website is not necessarily real-time nor accurate. All CFDs (stocks, indexes, futures) and Forex prices are not provided by exchanges but rather by market makers, and so prices may not be accurate and may differ from the actual market price, meaning prices are indicative and not appropriate for trading purposes. Therefore Fusion Media doesn`t bear any responsibility for any trading losses you might incur as a result of using this data.

Fusion Media or anyone involved with Fusion Media will not accept any liability for loss or damage as a result of reliance on the information including data, quotes, charts and buy/sell signals contained within this website. Please be fully informed regarding the risks and costs associated with trading the financial markets, it is one of the riskiest investment forms possible.