“As far as the January-March 2021 period is concerned, then the FMCG market has seen growth for the third straight quarter. However, the spread of Covid-19, especially into rural areas, is a key monitorable. If the virus spreads drastically into rural areas, it will have an impact on the FMCG market,” Diptanshu Ray, NielsenIQ South Asia lead, said.

This concern has also been flagged by Hindustan Unilever (HUL), the country’s largest consumer goods company. In an interview to Business Standard last week, HUL Chairman and MD Sanjiv Mehta said the spread of Covid into rural areas would impact economic activity.

ALSO READ: IIP shoots up on low base, retail inflation eases to a three-month low

While the impact on demand typically shows up with a lag in FMCG, the forecast of a challenging period as the virus spreads across the country hardly bodes well for the industry.

The trend of stricter measures in small towns and rural areas in states such as Punjab, Haryana, Kerala, Madhya Pradesh, Uttar Pradesh, Karnataka, Jharkhand, and Chhattisgarh has increased in May, even as big cities in key states remain vulnerable. Maharashtra’s daily coronavirus caseload, meanwhile, has fallen, though the death rate remains high, implying lockdown curbs are likely to continue in the state till the end of the month, sector experts said. 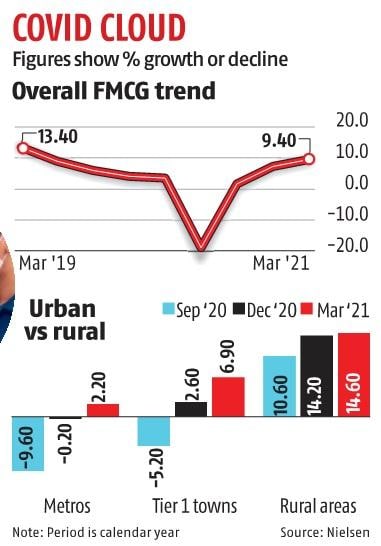 Rural contributes nearly 39 per cent to the overall FMCG sales, while urban contributes 61 per cent. The revival seen in the last three quarters in FMCG, said Sameer Shukla, customer success leader, NielsenIQ South Asia, has been led by rural, which grew 10.6 per cent in the September quarter, 14.2 per cent and 14.6 per cent in the December and March quarters, respectively.

“Also, the shift from unbranded to branded has been growing in rural areas, thanks to the reverse migration that happened in the first wave of the pandemic. The monsoon was good last year and the forecast for rains this year, too, remains positive. If the spread can be contained in rural areas, it would go a long way to aid growth,” Shukla said.

In fact, channel checks by the agency showed that retailers in rural areas had been stocking more products in stores as rural consumption showed an uptick in the last few months. The number of categories stocked up by rural retailers now stands at 27.3 versus 26.8 earlier, Ray said.

“Retailers are willing to deal with a larger set of categories, and they are doing so without putting any extra burden in terms of stocking space or capital requirements,” he said.

E-commerce growth, on the other hand, has tapered off from the peak visible during the lockdown and unlock phases last year. From levels of about 30.3 per cent in the September quarter, e-commerce growth halved in the March quarter, touching 15.7 per cent, according to Nielsen.

Also, foods as a category continues to grow ahead of non-foods, in part due to pricing action in the March quarter. The 13 per cent growth seen in the March quarter for foods, said Nielsen, was led by the 4 per cent volume growth and 8 per cent price-led growth during the period. In non-foods, which includes the home and personal care segments, volume growth stood at 5 per cent and price-led growth declined by 2 per cent during the January-March period.

Hiring activity bounces back with 15% rise in June, finds report