For digital multinationals such as Google, Facebook and Twitter, appointing grievance officers under new information technology (IT) rules does not imply that they have a “permanent establishment” in India.

But if their local office performs business functions and contributes to revenue of the parent firm abroad, it may attract domestic taxes, said two people in the revenue department.

This has come in the wake of foreign tech companies and others seeking legal advice on the tax implications of the government’s new IT order. They are required to appoint chief compliance officer, nodal officer and grievance officer from India. These firms fear that such appointments may attract income tax anywhere between 25 per cent and 40 per cent.

“Creating any physical presence in the form of a grievance officer or a nodal officer, that too in compliance to government directions, will not create any business connection or permanent establishment,” said one of the two people cited above.

Despite having local offices in the country, their entire income does not come under the tax net due to different tax structures under which they operate.

However, they pay an equalisation levy of 6 per cent on their advertising revenue and digital transactions.

“Any such appointments are recognised as ‘auxiliary duties’ in tax terms where appointments are made for regulatory purposes. It has nothing to do with the core business of a company unless it is doing any income earning functions. So, in that case, it can’t be considered a permanent establishment,” said a senior revenue official. 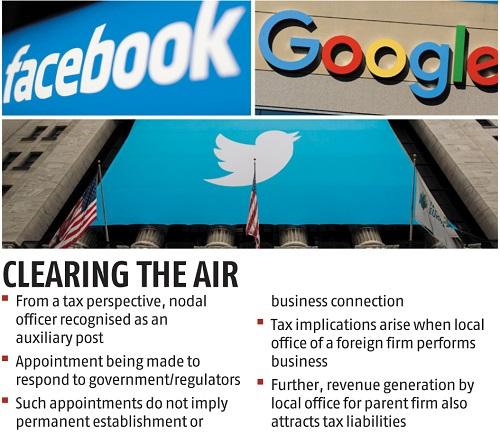 However, if they are setting up an office with staff and operating fully, then a risk of taxation arises, he added.

From a domestic law perspective, permanent establishment is defined under Indian Income Tax Act as a fixed place of business where the business of the enterprise is wholly or partly carried on that indicates business connection between the foreign parent and Indian company.

Another official said the tax department works strictly in accordance with the Income-tax Act and global standard international taxation and transfer pricing rules.

The appointment of a nodal officer, according to the Information Technology Act, is an issue under a different Act. And if it affects the taxation of these multinational corporations (MNCs), it would depend on the individual case facts, he said.

The international taxation rules, particularly with respect to permanent establishments, have been the critical area for multinationals as the rules usually call for taxing the profit in countries where they create value.

However, there have been significant changes seen due to base erosion and profit shifting type measures of the Organization for Economic Cooperation and Development (OECD), which gets support from countries globally, including India.

Earlier this week, G7 finance ministers had agreed to a global minimum corporate tax rate of 15 per cent and taxation of profits based on country of sales — aligned with the OECD workplan.

India’s new IT rules, which came into effect in mid-May, intend to regulate content on social media platforms. The rules make them more accountable to legal requests for removal of posts and sharing details on the originators of messages. The issue aggravated when the government slammed Twitter for not complying with the rules.

The Centre said Twitter has lost immunity as it has failed to abide by the law.