Clearing the way for inducting another four squadrons of the indigenous Tejas light combat aircraft (LCA) into the Indian Air Force (IAF), the Union Cabinet, under the chairmanship of Prime Minister Narendra Modi, sanctioned the procurement of 83 fighters on Wednesday.

Hindustan Aeronautics Ltd (HAL) will act as the lead integrator for building the aircraft at a targeted rate of 16 fighters per year. The first aircraft will be delivered three years after HAL and the IAF sign a contract.

“(The Cabinet) has approved the procurement of 73 LCA Tejas Mark 1A fighter aircraft and 10 LCA Tejas Mark 1 trainer aircraft at a cost of Rs 45,696 crore, along with design and development of infrastructure sanctions worth Rs 1,202 crore,” the ministry of defence (MoD) said.

It has taken the MoD more than three years to negotiate this contract with HAL — one of its own defence public sector undertakings. The ministry had accorded “acceptance of necessity” for 83 Tejas aircraft in December 2017, and HAL submitted technical and commercial bids in March 2018. Since then, the two sides have been negotiating technical issues and the price.

“It is the first ‘Buy (Indian – Indigenously Designed, Developed and Manufactured)’ category procurement of combat aircraft with an indigenous content of 50 per cent, which will progressively reach 60 per cent by the end of the programme,” announced the MoD.

The negotiated price amounts to about Rs 550 crore per Tejas Mark 1A fighter, which is significantly higher than the Rs 430 crore cost of each Sukhoi-30MKI that HAL builds.

The reasons for this high cost is the four major improvements the IAF has demanded over the current Tejas Mark 1 version. The most challenging involves equipping the Mark 1A fighter with active electronically scanned array (AESA) radar, in place of the current manually scanned Israeli Elta EL/M 2032 radar. The IAF has also demanded a “self-protection jammer” (SPJ), integrated on an external pod under the Tejas’ wing.

Two other upgrades are less complicated: Improving the “maintainability” of the fighter and fitting it with the capabilities and attachments for air-to-air refuelling (AAR). 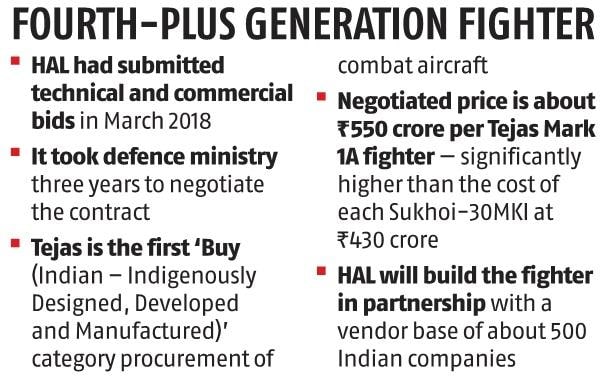 Terming the Tejas Mark 1A a “fourth-plus generation fighter”, the MoD said it was “equipped with critical operational capabilities of AESA radar, beyond visual range (BVR) missile, electronic warfare (EW) suite and AAR”.

The sanction of Rs 1,202 crore is for the IAF to develop repair and servicing infrastructure at their base depots “so that the turnaround time would get reduced for mission critical systems and would lead to increased availability of aircraft for operational exploitation”, said the MoD.

To ramp up production, HAL has set up a second production line in Bengaluru and resorted to outsourcing aerostructure assembly. On December 20, 2017, the defence minister told Parliament: “For ramping up production capacity from existing eight aircraft to 16 aircraft per annum, Government of India has sanctioned Rs 1,381.04 crore in March 2017.”

HAL will be building the Tejas Mark 1A in partnership with a vendor base of about 500 Indian companies, including micro, small and medium enterprises in the design and manufacturing sectors. “The programme would act as a catalyst for transforming the Indian aerospace manufacturing ecosystem into a vibrant ‘Atmanirbhar’, self-sustaining ecosystem,” stated the MoD.

Major assemblies of the Tejas fighter are manufactured by four major, Tier-1 suppliers and then integrated by HAL in Bengaluru into the fully-built fighter. The front fuselage is built by Dynamatic Technologies Ltd; the centre fuselage by VEM Technologies, Hyderabad; the wings by Larsen & Toubro, Coimbatore; and the rear fuselage by Alpha Tokal, Bengaluru.

The IAF has already ordered two squadrons of the Tejas Mark 1 fighter. This order will take up the Tejas squadron numbers to six, after which the larger, more powerful Tejas Mark 2 fighter is slated to enter service.

Spectrum auction bids likely to be in range of Rs 30-60K cr: Analysts