These are the findings of Oxfam India’s “Inequality Report 2021: India’s Unequal Healthcare Story”. The report says that the absence of universal health coverage has starkly and disproportionately affected marginalised groups at a time when socio-economic inequalities in India are growing because of the Covid-19 pandemic.

While 65.7 per cent of the households belonging to the general category have access to improved, non-shared sanitation facilities, only 25.9 per cent ST households have better, non-shared sanitation facilities. Also, 12.6 per cent more children are stunted in SC households than those in general category homes. And, the chances of a child dying before the age of five are three times higher for the bottom 20 per cent of the population compared to the top 20 per cent. The Oxfam India report also finds that institutional births and access to food supplements under the Integrated Child Development Services (ICDS) are 10 per cent less for Muslim households as compared to Hindu households; and 8 per cent less children are immunised in Muslim households.

The disastrous second wave of the Covid-19 pandemic further exposed the weakness of India’s public healthcare system. The National Health Profile (NHP) in 2017 showed that there is only one government allopathic doctor for every 10,189 people and one state-run hospital for every 90,343 people.

At 0.5, the number of hospital beds per thousand population in India is lower than some of the lesser developed countries such as Bangladesh (0.87), Kenya (1.4), and Chile (2.1).

Constant underfunding of the public healthcare system in the last decade has worsened health infrastructure, the Oxfam India report shows. The number of hospital beds per 10,000 population between 2010 and 2020 reduced from nine to five. Currently, India ranks 155 out of 167 countries on bed availability and has five beds and 8.6 doctors per 10,000 of its population. Rural India, which makes for 70 per cent of the population, has barely 40 per cent of the beds, the report shows.

This failure had a devastative result when the second wave of the Covid-19 pandemic struck: By May 2021, one in every two cases was in the rural areas, with states like Uttar Pradesh and Rajasthan having 75 per cent of their cases in rural areas.

“Persistent underfunding of (the) public health system, especially primary health care and inadequate health infrastructure in India remain to be addressed by the government even after (the) devastating second wave,” said Amitabh Behar, CEO, Oxfam India.

While India’s overall health indicators have improved in the last few decades, these gains have been skewed in favour of some. Over the years, a better health system has, for instance, helped increase life expectancy, but outcomes have varied across gender, caste and income levels, shows the Oxfam India report. Sample this:

The report recommends implementation of universal health coverage (UHC) supported by a strong public health sector. Marginalised communities also face a disproportionate burden of out-of-pocket expenditure (OOPE) on health. According to government estimates, 60 million people are pushed into poverty every year due to healthcare expenditure.

“Even after one year into the pandemic and facing two Covid-19 waves, (the) government of India has repeated its failure to allocate 2.5 per cent of gross domestic product (GDP) for health,” said Anjela Taneja, Inequality, Health & Education lead Oxfam India. 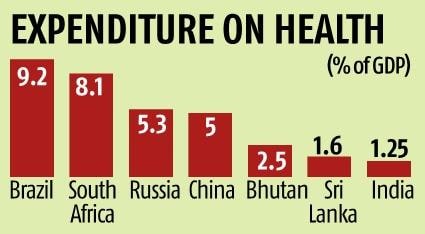 The report also finds that the limited scope and coverage of insurance schemes instituted by state and Union governments cannot address the all-encompassing requirements of UHC. Data decently obtained through Right to Information (RTI) showed that only 19 people got Covid-19 treatment under the Union government’s Ayushman Bharat in Bihar, one of the worst affected states during the second wave, said the report.

A primary survey of 768 respondents by Oxfam India, with Covid-19 or having recovered from Covid-19, showed the following: