“There is a tendency in this country to not leave any loophole unexplored. That is the philosophy with which it is approached by the accounting profession. This advice is tendered at an expensive cost to the industry,” said Somanathan at a post-Budget interaction with stakeholders and industry representatives in Bengaluru.

The interaction was also attended by finance minister Nirmala Sitharaman.

Somanathan said while there are many genuine problems that the government needs to correct, there are also cases “where industry seeks very deep loopholes on some very speculative interpretation.”

Bajaj added to his colleague’s point and gave an example:

The Budget has proposed a retrospective amendment to the Income Tax Act from assessment year 2005-06 to stop companies from claiming cess and surcharge as business expenditure during tax calculations. Tax experts say this could lead to re-opening of past cases. 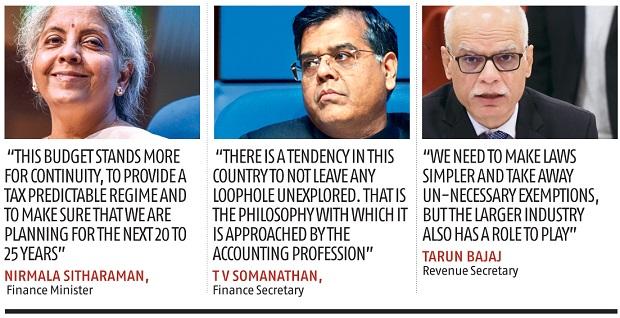 “We need to make laws simpler and take away unnecessary exemptions, but the larger industry also has a role to play,” Bajaj said.

Speaking at the interaction, Sitharaman said, “This Budget stands more for continuity, to provide a tax predictable regime and also to make sure that we are planning for the next 20-25 years. It gives a vision and also some kind of roadmap through which we want to achieve fundamental infrastructure, which will help us to be proud of ourselves.”

Underlining that the country is still coming out of the effects of Covid-19, she said that the nation needs to have a support system particularly for health, which is completely stabilised and strengthened.

She also stressed that there was a need for “waking up for the children, who have lost out on two years of education and bridging the gaps.”

Sitharaman pointed out that the Budget is also about making sure that states have a participatory role in whatever the Centre is doing. Funds are being shared with them and they can actively engage in infrastructure building as well.

Stating that each one of the investments doesn’t stand alone in a silo, Sitharaman told the gathering that the Centre brought in the principle of PM Gati Shakti. This will be an umbrella-like scheme for several projects that are aimed for mutual benefit of the industry.