With the southwest monsoon on an extended break, the India Meteorological Department (IMD) on Thursday sought to play down the fears and said a revival was round the corner, but with a word of caution that there was an equal probability of the rains being “below normal”, “normal” or “above normal” in July.

Climatically, the IMD said rain in July was expected to be 96-104 per cent of the Long Period Average (LPA), considered normal for the country as whole. However, chances are in July rain in parts of North-West India, South Peninsular, and parts of Central and North-East India might remain “normal” to “below normal”.

The Met said though El Nino was expected to remain “neutral” during the southwest monsoon season, there was an enhanced possibility of the Indian Ocean Dipole (which is another weather phenomenon that has a bearing on the Indian monsoon) becoming negative over the Indian Ocean in July to September 2021.

A negative IOD is not favourable for the monsoon in India.

“As sea surface temperature (SST) conditions over the Pacific and the Indian Ocean are known to have a strong influence on the Indian monsoon, the IMD is monitoring their evolution,” IMD Director General Mrutyunjay Mohapatra told reporters. 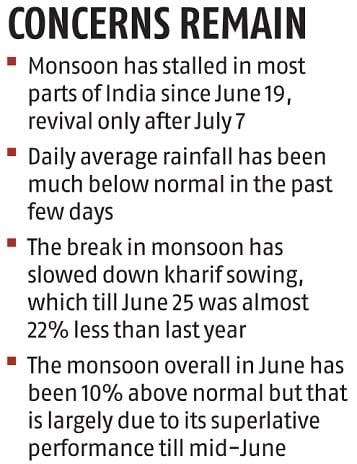 July and August are the two most crucial months of the four-month southwest monsoon season. Any break or deviation in rain in July and August could have a devastating impact on the country’s agriculture and the production of kharif crops, the sowing of which has fallen behind last year’s levels due to the sudden and unexpected break in the rains.

The progress of the southwest monsoon in the country stalled from June 19 mainly due to the absence of low pressure of the north Bay of Bengal, mid-lateral westerly winds, and the unfavourable Madden Julian Oscillation (MJO). So much so that the progress of the rains, which was ahead of schedule till the middle of June, stalled and now it is expected to cover the country by the middle of July against its normal date of July 8.

Though overall for the country as whole, the monsoon in June has been 10 per cent more than its Long Period Average (LPA), that has been largely on account of a steady progress till the middle of that month.

“In normal times, the break in monsoon is five-six days, but this year it has been extended and there is no chance of any progress till at least July 7,” Mohapatra said.

He said this was expected to affect agriculture and the sowing of kharif crops, the irrigation schedule, and also power supply, but hoped that the expected revival might wipe off the losses. “In North India, where the monsoon has yet not reached and its progress has been stalled, transplanting paddy usually takes place in the middle of July, therefore there is still time left,” Mohapatra said.

For the entire season, though, the IMD is hopeful that the rains will be along expected lines and stick to its June 1 forecast of cumulative rainfall to be 101 per cent of the Long Period Average with a model error of plus and minus 4 per cent.