Last year the RBI’s board approved a record payment of Rs 1.76 trillion ($23.5 billion) to the government, which included Rs 1.23 trillion as dividend and Rs 526.4 billion from its surplus capital

India’s Finance Minister Nirmala Sitharaman can expect another payout from the central bank in coming weeks, but it’s unlikely to plug a huge government revenue hole created by the pandemic.

The Reserve Bank of India’s board, led by Governor Shaktikanta Das, is meeting Friday, and since August is typically the month the central bank makes its annual transfer to the government, expectations are running high that the RBI will disclose its dividend payout.

Last year the RBI’s board approved a record payment of Rs 1.76 trillion ($23.5 billion) to the government, which included Rs 1.23 trillion as dividend and Rs 526.4 billion from its surplus capital. This year, New Delhi has budgeted for a Rs 600 billion transfer, but local media has speculated authorities are expecting more. Analysts and economists are forecasting anything between 400 billion to 1 trillion rupees.

“Our estimate is for Rs 400-500 billion, so it may fall short of the budgeted levels and thereby adding to fiscal pressures,” said Kanika Pasricha, an economist at Standard Chartered Plc in Mumbai.​ 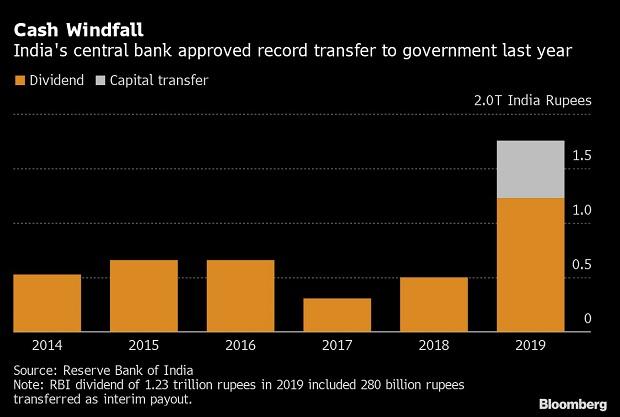 Revenue is falling well short of projections as India’s economy heads for its first full-year contraction in more than four decades. At the same time, the government is being forced to spend more to cushion the blow from the pandemic, straining the budget deficit. The government can help bridge the funding gap by drawing more cash out of the central bank, sell state assets and push up borrowing, which is already at a record high.

With limited alternative revenue sources and the budget gap in the first three months of the fiscal year already standing at 83% of the full-year target, calls are growing for the RBI to directly finance the fiscal deficit. Central banks in Indonesia and the Philippines have already adopted this approach, but those opposed to debt monetization in India cite risks to the nation’s credit rating and inflation, which is already above the RBI’s 2%-6% target range.

“To make up for that shortfall the government and the RBI need to go in for monetization of fiscal deficit. A transfer of few hundred billion rupees of additional reserves from the central bank is unlikely to move the needle much for government finances, in our view.” — Abhishek Gupta, India economist

The RBI pays dividends to the government every year, based on the profits from its investments, both home and abroad, and printing of notes and coins. In recent years the government has been putting pressure on the central bank to increase its payouts. An expert committee last year recommended the central bank could part with some of its surplus capital.

“We expect dividend of Rs 1.05 trillion based on higher income from domestic assets,” said A Prasanna, chief economist at ICICI Securities Primary Dealership in Mumbai. He expects the central bank to set aside more than 700 billion rupees to maintain capital buffers.

–With assistance from Suvashree Ghosh.

From road transport to health insurance, tax rules that changed from Oct 1

Indian economy to rebound with 8.9% growth in fiscal 2022: IHS Markit