Around 50 per cent of Reliance Retail’s nearly 12,000 stores were fully shut in the quarter, while 29 per cent were partially open, the company said on Thursday

Reliance Retail, the retail arm of Reliance Industries (RIL), reported a 47.4 per cent drop in earnings before interest tax depreciation and amortisation (Ebitda) for the April-June period, as the Covid-19 pandemic and subsequent lockdown disrupted business significantly. It stood at Rs 1,083 crore for the quarter versus Rs 2,060 crore reported a year ago.

Around 50 per cent of Reliance Retail’s nearly 12,000 stores were fully shut in the quarter, while 29 per cent were partially open, the company said on Thursday.

The significance of the retail business can be gauged from this — along with Jio, retail contributes 35 per cent to RIL’s consolidated Ebitda, company Chairman Mukesh Ambani had said at the firm’s annual general meeting a fortnight ago.

“Our consumer-facing businesses became the lifeline for individuals and businesses with our retail and Jio teams working hard to ensure millions got essential goods and services through the lockdown,” Ambani said on Thursday following the announcement of results.

Grocery helped the retail arm during the quarter, with the segment witnessing 21 per cent year-on-year growth in the period under review. Consumer electronics and fashion and lifestyle businesses, on the other hand, were hit hard, the company said, as stores were closed during the quarter. 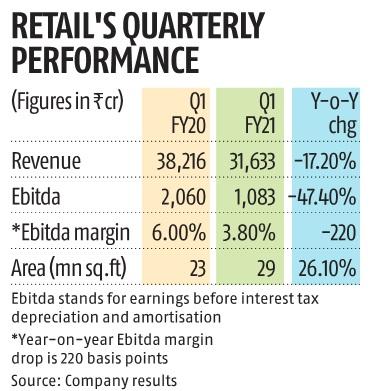 Around 21 per cent of Reliance Retail’s revenue comes from food and grocery segment, 27 per cent from consumer electronics and 8 per cent from fashion and lifestyle, sector analysts tracking the firm said. The balance is contributed by Jio sales points and fuel retail outlets.

In the past few years, Reliance Retail has been pushing up its contribution from core retail, that is, food and grocery, consumer electronics and fashion and lifestyle, brokerage Edelweiss said in a report on the company.

Ambani’s e-commerce bet, JioMart is expected to pitch in here, with the online platform clocking 250,000 orders per day, since it went live in 200 cities in May. This is ahead of competitors such as BigBasket, Grofers and Amazon Pantry.

According to the recent report by brokerage Goldman Sachs, JioMart is poised to sell half of all online grocery in the next few years, led by significant investment by the company.

Ambani has already indicated that Reliance Retail has received strong interest from global strategic and financial investors and that they would be inducted in the quarters ahead. Speculation has been rife that Amazon may invest in the company, but there were no indications of the same given on Thursday. There was also no disclosure on the likely deal with Future group by Reliance.

CCI throws out antitrust complaint against WhatsApp regarding pay feature

In a first, Amazon Pay, Uber partner to allow Indian users to pay for rides