According to currency dealers, there would be a weakening bias to the rupee as long as global headwinds play out

The government’s decision to go ahead with its scheduled auction of bonds this week, after cancelling the previous two auctions, further hurt sentiment in the bond market.

On Tuesday, the rupee weakened around 36 paise against the dollar, which closed the day at Rs 74.85.

According to currency dealers, there would be a weakening bias to the rupee as long as global headwinds play out. The domestic currency could slip beyond the 75/$-mark soon.

More updates are likely to trigger volatility for the dollar. Also, preliminary manufacturing PMI numbers from the US will be important to watch. We expect the USD-INR (spot) to trade sideways with a positive bias and quote in the range of 74.70-75.20,” Somaiya said.

The positive impact on the rupee — that was expected after the Reserve Bank of India (RBI) on Monday announced a dollar-rupee 2-year sell-buy swap auction for $5 billion on March 8 — was overshadowed by the geo-political development.

RBI said the swap was proposed with a view to elongating the maturity profile of its forward book and smoothen the receivables relating to forward assets.

The spurt in crude oil prices impacted bond yields as yield on the 10-year government bond moved up 6 bps to close the day at 7.75 per cent.

Brent crude prices shot up to $ 99.1/bbl from 96/bbl on Monday after the Russia-Ukraine crisis deepened further. Though later, it fell to $97.86/bbl.

The mood in the bond market turned sour as the government decided to go ahead with a planned auction this week.

Speaking to the media on whether the government plans to borrow more in the current fiscal year, economic affairs secretary Ajay Seth said the government is committed to maintain its fiscal deficit target of 6.9 per cent. However, he also added that the market will not be surprised and any communication will be made in advance. 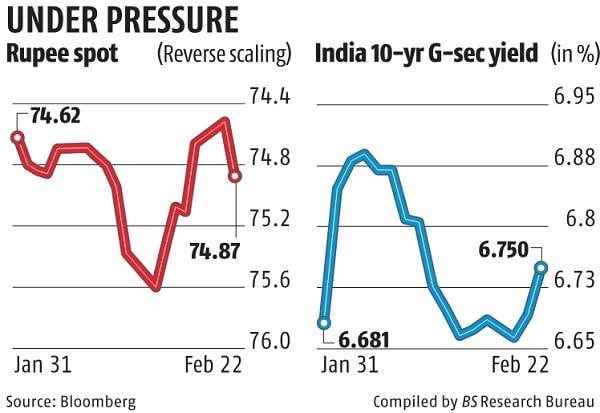 “It is a dynamic condition. The condition was comfortable, and hence, there was no need to borrow. There will not be any surprises (action like auction) and be communicated in advance,” Seth said.

Bond yields shot up after the Union Budget announced a massive borrowing programme — much higher than what the market was expecting. It was at Rs 15.9 trillion gross borrowing for the next fiscal year.

Later, a ‘super dovish’ stance from the central bank in the bimonthly policy review cooled down the yields.

Analysts said the relief rally in bonds — that started after the RBI’s monetary policy on February 10 — could be short lived if the geo-political tensions continue to impact crude oil prices.

India, which imports over 80 per cent of its crude oil requirements, will be impacted badly from rise in crude oil rates as it will put pressure on prices.