Justice Arun Mishra said: “We want to go into the cause for initiation of insolvency against telcos under the IBC.”

The Supreme Court on Monday adjourned its hearing in the adjusted gross revenue (AGR) matter, which involves telecom operators under insolvency such as Reliance Communications, Aircel, and Videocon Telecommunications.

The apex court asked the Centre to prepare a plan for recovering AGR dues from the bankrupt telcos.

Justice Arun Mishra said: “We want to go into the cause for initiation of insolvency against telcos under the IBC.”

The amount recoverable from RCom is Rs 31,000 crore, while that from Aircel is Rs 12,389 crore. Insolvency proceedings had begun following claims made by operational creditors Ericsson and China Development Bank.

In an affidavit filed with the Supreme Court, Sistema Shyam Teleservices (SSTL) had said RCom was liable to pay its AGR dues.

The Department of Telecommunications has arrived at a combined AGR liability of Rs 25,195 crore for RCom and SSTL as on March 6, 2020.

Of the total liability, Rs 222 crore belongs to the Indo-Russian joint venture that merged into RCom in 2017. RCom had filed for insolvency back in February 2019. 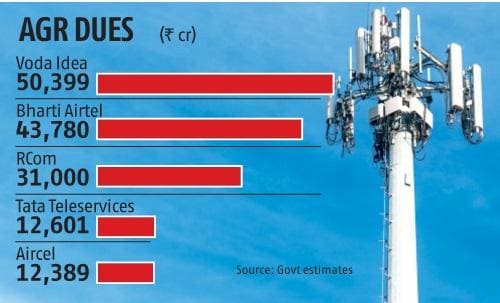 On July 20, the apex court reserved its order allowing a staggered payment schedule to telcos for paying up their AGR dues.

A bench comprising Justices Arun Mishra, S Abdul Nazeer, and M R Shah had reserved its verdict on the issue of a timeline for relaxed payment of AGR dues by operators. The apex court had said that the veracity of action taken by RCom, Aircel, SSTL, and Videocon would be examined.

On June 18, the apex court was informed by the Centre that the DoT had decided to withdraw 96 per cent of the Rs 4-trillion demand for AGR-related dues raised against non-telecom public sector undertakings like GAIL.

The apex court had asked private telecom companies such as Bharti Airtel and Vodafone Idea to come out with a “reasonable payment plan”, make some payment to “show their bona fide”, and also file their books of accounts for the last 10 years.