For two consecutive months, Wal­mart-backed PhonePe has processed more than a billion transactions on the Unified Payments Interface (UPI) platform of the National Payments Corporation of India (NPCI).

It maintained its top position in the pecking order of UPI apps, followed by Google Pay. In April, PhonePe processed 1.18 billion transactions on its platform amounting to Rs 2.34 trillion, thereby capturing more than 45 per cent market share in terms of volume of transactions on UPI.

In March, it had processed 1.19 billion transactions amounting to Rs 2.31 trillion.

On the other hand, Google Pay registered 905.96 million transactions in the same period, amounting to Rs 1.9 trillion, thus capturing a market share of 34.3 per cent in the UPI space.

Last month, it had processed over 957 million transactions worth Rs 2.01 trillion.

Among other large players in the UPI apps space, Paytm Payments Bank processed 320.78 million transactions in April, amounting to Rs 36,859.20 crore. It has a market share of 12 per cent in the UPI space as far as volume of transactions processed is concerned. 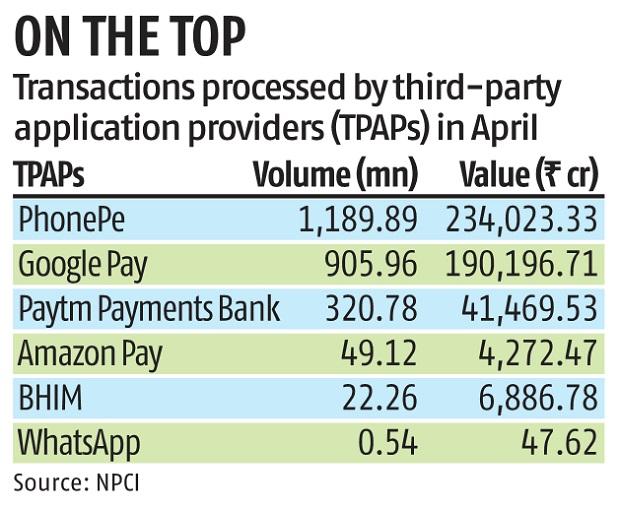 “PhonePe continued to gain share in UPI transaction volumes. Google Pay and Paytm both lost some share and accounted for 33.5 per cent and 14 per cent of the transaction volumes, respectively, in April. WhatsApp volumes continue to be sluggish, at 0.2 per cent share, and hasn’t progressed as expected at the time of its much-awaited launch,” said Shishir Mankad, managing partner and head – financial services, Praxis Global Alliance.