Masayoshi Son, SoftBank Group Corp.’s billionaire founder, checks the chart. Then again. Another time. And once more for good measure

Masayoshi Son, SoftBank Group Corp.’s billionaire founder, checks the chart. Then again. Another time. And once more for good measure.

Lately it’s only moved in one direction: Up.

It’s not a chart of the firm’s stock picks. Those are sinking fast. So too is Son’s fortune — at $13.7 billion, it’s crashed $25 billion in the past year, according to the Bloomberg Billionaires Index.

The chart is SoftBank’s loan-to-value ratio, which Son says he checks four times a day. It’s key to how he staged his comeback over the past two decades after losing $70 billion during the dot-com crash.

Just last year, SoftBank was flying high, borrowing against its wildly lucrative stakes in tech investments such as Alibaba Group Holding Ltd. and plowing the money into the promising upstarts of tomorrow. Even when there were epic failures — Wirecard AG or Greensill Capital — profits elsewhere buried the problem.

From China’s tech crackdown to Russia’s invasion of Ukraine, inflation to the markets, a litany of troubles has beset Son and his conglomerate.

The stock has tumbled almost 60% in the past year and the loan-to-value chart that Son obsesses over daily just keeps ticking higher, indicating SoftBank’s net debt is getting unwieldy relative to the equity value of its holdings. Some market watchers are flagging the risk of margin calls.

“There’s no good news in sight,” said Tomoaki Kawasaki, a senior analyst at Iwai Cosmo Securities Co. “If they’re asked to increase collateral, it’ll mean investors have to be more cautious of the finance risks the company’s facing.”

Son, 64, acknowledges these are difficult times.

In February, he described SoftBank as being “in the middle of a winter storm” and announced a 1.55 trillion yen ($13 billion) decline to 19.3 trillion yen in the net value of the company’s assets for the three months through December.

Since then, it’s just gotten worse.

The market for new share sales, critical to SoftBank’s success, has dried up. Didi Global Inc. sank a record 44% on Friday after the ride-hailing company suspended preparations for a Hong Kong listing. In the latest sign that SoftBank is strapped for cash, its Vision Fund sold $1 billion of shares in South Korean e-commerce giant Coupang Inc. at a discount last week.

“The macro picture for SoftBank’s investments and prospect for listings are not looking good,” said Amir Anvarzadeh, a strategist for Japan equity at Asymmetric Advisors, who recommends betting against the stock. The falling value of its investments, such as Alibaba, exposes the company to the risk of margin calls, he added.

Son has explained to investors how he checks SoftBank’s loan-to-value ratio, or LTV, multiple times a day. The measure, calculated by dividing its net debt by the equity value of its holdings, jumped to 22% at the end of last year from 8.8% in June 2020. 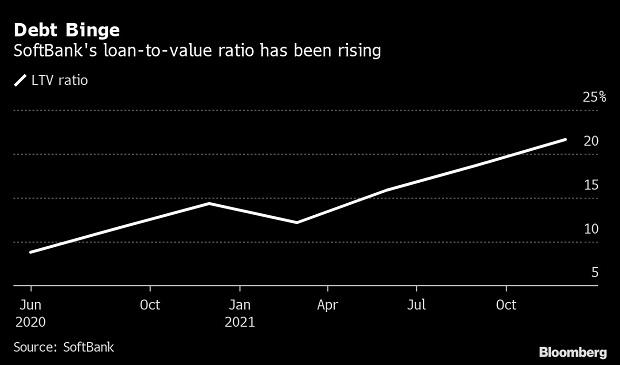 The conglomerate aims to keep the ratio under 25%. But an increase in borrowing, along with declines in Alibaba and SoftBank shares, have pushed it even higher this year.

S&P Global Ratings, which unlike SoftBank includes margin loans in its LTV calculation, estimated the ratio at 29% on a March 7 call, according to Bloomberg Intelligence senior credit analyst Sharon Chen. If it exceeds 40%, that could trigger a potential downgrade from the current BB rating.

The Japanese firm depends on financing to maintain its investment pace and support its share buyback program. It will need as much as $45 billion in cash this year, Jefferies analyst Atul Goyal predicted last month, adding that it will probably sell Alibaba shares to meet the demands.

SoftBank has long relied on asset-backed financing, which is cheaper than other forms of funding. This includes pledging assets in exchange for cash to invest in early-stage startups and using prepaid forward contracts — where SoftBank receives money upfront for a future sale of its holdings.

As of December, it had pledged more than half of its stakes in Alibaba, T-Mobile US Inc., Deutsche Telekom AG and its telecom unit SoftBank Corp. Asset-backed financing makes up $54 billion of the conglomerate’s $128 billion in total debt, according to a BI analysis.

“They have to keep raising financing, and the complexity of the ways they do it is probably what makes people less comfortable,” BI’s Chen said.

Son has some of the biggest personal loans tied to company stock on the planet after pledging shares worth $5.7 billion to 18 lenders including Bank Julius Baer & Co., Mizuho Bank Ltd. and Daiwa Securities Group Inc.

The conglomerate also provides loans to some executives as part of its incentive program, with the purpose to buy company shares, the spokesman said.

To help finance a stake in T-Mobile, SoftBank loaned $515 million to Marcelo Claure, the former chief operating officer who stepped down in January over a compensation dispute with Son.

SoftBank may exploit multiple types of financing, but it’s still primarily a tech investment firm and Son has made a string of hugely profitable bets.

Last year, it reported the largest ever quarterly profit for a Japanese company and its stock climbed to a record. The listings of Coupang and delivery platform DoorDash Inc. helped offset losses from WeWork, Greensill Capital and Wirecard — the latter two collapsed amid fraud scandals.

But it’s going to be harder for Son to eke out gains. Alibaba, SoftBank’s largest investment, has lost 35% this year, while SoftBank itself is down for a fourth day, heading for its lowest price since April 2020. All but three of the 23 stocks backed by the conglomerate that listed in 2021 have fallen below their initial public offering prices, and the cost of insuring the company’s debt against a default has more than doubled. Despite the string of bad news, 18 of the 20 analysts with a rating tracked by Bloomberg recommend buying the stock. While the challenging environment makes it harder to predict the timing of the buyback plan and investments in the second Vision Fund, “we do not see a crisis per se,” said Kirk Boodry, an analyst at Redex Research who doesn’t rate the shares.

“There is some cushion there, despite poor performance of the portfolio over the last three quarters,” he said.

SoftBank isn’t changing strategy. After repaying $10 billion in loans secured by Alibaba shares, it arranged $6 billion of new debt in December. Last month, it asked banks vying for roles in the potential listing of chip designer Arm Ltd. to provide it with $8 billion in funding, people familiar with the matter said.

What’s more, Son remains optimistic that winter will soon be over.

“We will see a spring sooner or later, and we keep sowing seeds,” he said in February. “Steadily, the seeds are growing.”